A regular competitor on the British and international Dressage scene, Kate produces and competes at Young Horse classes up to Grand Prix. 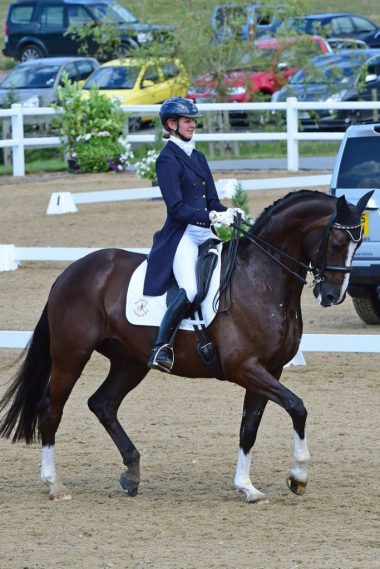 Kate represented Great Britain on numerous occasions as a Junior/Young Rider at the European Dressage Championships, winning Team Bronze in 2000 riding Westwell Jem. Moving out of young riders Kate continued her success and represented Great  Britain at Small Tour and Big Tour, winning several Internationals. Kate has worked hard to produce strength in depth to her string and now has an extremely strong power house of horses behind her and is in a position to aim towards International Grand Prix  and a British Team place.

Kate is a highly motivated individual who aims to train and compete to the highest level possible and is dedicated to passing her knowledge to other aspiring riders, professionals and amateurs alike, training at clinics around the UK and at her own yard . She holds the UKCC 3.

To round off 2017 ’s extremely successful season, Kate was one of only eight dressage riders to be invited to Liverpool International in December with Samba Dancer, to compete in the Invitational Intermediare I Kur.

END_OF_DOCUMENT_TOKEN_TO_BE_REPLACED

Short Term Targets Working hard to produce and create strength and depth to her equine power house, Kate is setting her sights on International Grand Prix in 2020 and has so far; 3 horses at intermediaterII/Grand Prix at Premier Leagues…